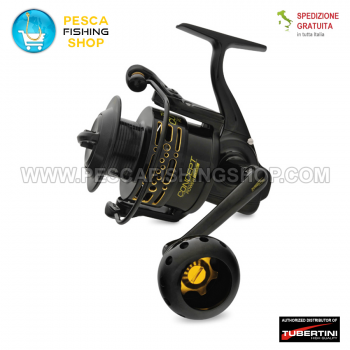 » Add to my wishlist

This product is not sold individually. You must select at least 1 quantity for this product.

Very powerful and reliable reel. The Concept Power 5000L Ryobi Tubertini born from the development of another ryobi, the legendary Metalroyal Fishing Safari.

The Concept Power 5000L, however, weighs less than the Safari.

These are his essential technical skills: power of the clutch of 25 pounds (power drag); 6 bearings;

We emphasize the presence of the exclusive system "FS Drag System" with dual adjustment of the clutch, which is made with nine steel disks alternating with three carbon discs in order to obtain the total zeroing of the clutch.

Compared to the previous "Safari" version, in this model Tubertini removed the anti-return lever. This lever was a useless surplus, and also risky when confronted with large fish such as tuna, amberjack, but also torpedoes and sturgeons in inland waters.

All these aspects make the Concept Power a reel with extreme resistance and reliability.

Watch a trolling and lure fishing video in which Concept Power 5000L Ryobi Tubertini are used:

Copyright of the text PescaFishingShop.com - prohibition of use

30 other products in the same category: